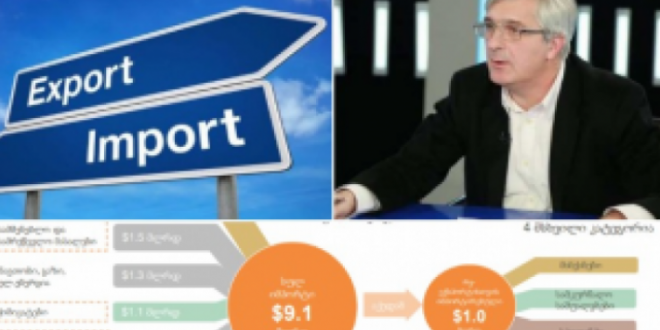 TBILISI(BPI)- Georgia has the potential to reduce imports by $ 850 million through agriculture and the building materials production – a study conducted by the Galt and Taggart brokerage company says.

According to the report, the pandemic showed need to increase domestic production and diversify supplies.

“A pandemic will significantly change the economic model around the world making economies more autonomous, aimed at the maximum satisfaction of their own needs using internal resources.

In the current situation, Georgia must revise the development model, otherwise it will not achieve sustainable economic growth. The country should focus on the local production, especially in sectors having  the greatest potential primarily in agriculture and the building materials production.

In the agriculture sector meat, milk, grain, vegetables and fruit production should be a priority. Productivity growth in these sectors will  reduce imports by $ 400 million, as well as will boost exports diversification.

The main obstacles that impede the development of the agricultural sector are the low level of land consolidation and low productivity.

Imports in the construction sector accounts  for $ 450 million, and can be replaced in this industry. According to preliminary estimates,  the production of building materials such as cable, fittings, plastic, paints, furniture, wood, ceramics, cement clinker can be  increased, ”the report says.

According to economist Gigi Bedianashvili, Georgia really has the potential to increase production and replace imports, but this should not be an end -in -itself.

Galt & Taggart report says that due to the low level of productivity, a significant part of foreign exchange earnings from tourism are spent to cover imports. In 2019 Georgia’s tourism revenues amounted to $ 3.3 billion, of which exports accounted for  2 billion.

“Imports should not be substituted  at the expense of  deterioration in the quality of life. We must not allow people to buy low-quality and expensive local goods because of the desire to increase local production and reduce import dependence. To stimulate a local production the country needs a normal judicial system and low taxes, ” the economist explains