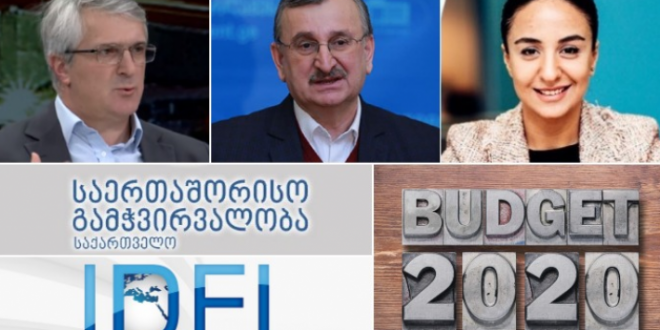 TBILISI(BPI)- The COVID-19 outbreak has significantly affected Georgia’s 2020 state budget. The economic crisis caused by the pandemic has dramatically cut budget revenues and increased health and social care costs. On June 24, a large-scale change was made in the state budget law of 2020 and the Parliament approved the so-called anti-crisis budget.

“I do not remember such a thing since the lari was introduced. In the $ 16 billion budget, $ 8 billion is debt, $ 560 million – grants that is 54% of the budget is made up of grants and loans. This will have a hardest impact on economic growth and next year’s budget. “Such a budget is a paradox,” Roman Gotsiridze, former president of the National Bank and chairman of the National Movement faction said while discussing the draft anti-crisis budget.

But  this is not the only detail in  the budget of paradoxes. As of June 30, 2020, government debt amounted to GEL 24.1 billion, which is about 49% of GDP for the last year. Experts say in a conversation with Commersant that  the increase in public debt was caused by additional commitments to serve the increased budget deficit and the lari depreciation. As a result, government debt will increase by GEL 7 billion this year to GEL 27.6 billion, which will be 54.8% of projected GDP (60% allowed by law).

“Such a large debt increases the risks in the country. it is bad in terms of attracting investment as when foreign debt is so high in a high-risk country, it makes it even less attractive to investors. “the instability of the national currency makes  public finances even more unpredictable, a further  lari‘s collapse will immediately raise the external  debt in dollars ,” Giga Bedineishvili notes.

Ana Gogoladze, executive director of the Freedom and Democracy Foundation, believes that the government is set to place GEL 600 million of additional domestic debt in certificates of deposit that means  subsidizing banks from the state budget, which is a paradoxical step in the current situation.

Finally, where did GEL 2.5 billion go that is the difference between budget revenue and payments? The change in the balance in 2019 was only GEL 121 million, this year we will be dealing with an unprecedented events. Do we have money amid a pandemic but do not spend it? This is also an important budget paradox. the government says that the remaining balance of the budget  will be spent on  the anti-crisis measures in case of the second wave of the pandemic?!