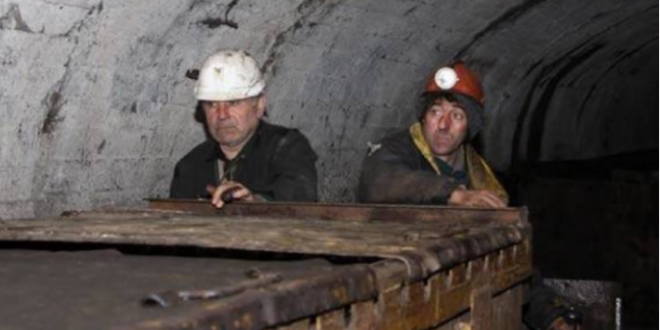 TBILISI(BPI)-The safety of workers in Georgia’s mines is at serious risk due to insufficient government regulation and resulting mining practices that prioritize production quotas and put workers’ safety in jeopardy, Human Rights Watch said in a report released today.

The 60-page report “‘No Year without Deaths’: A Decade of Deregulation Puts Georgian Miners at Risk” documents how weak labor protections and limited government oversight have allowed mining practices that undermine safety to flourish. Georgian labor law does not sufficiently regulate working hours, rest time, weekly breaks, and night work, and does not provide for government oversight of all labor conditions.

“Thousands of workers will be at heightened risk until Georgia regulates working hours and creates a system to inspect the broad impact of working conditions,” said Corina Ajder, Finberg fellow at Human Rights Watch. “It is entirely in Georgia’s power to protect workers and improve conditions for their health and safety.”

Manganese, a mineral used in steel production, is among Georgia’s top exports. The largest manganese producer, Georgian Manganese (GM), operates 11 mines and a processing plant, employing about 3,500 workers. Workers at GM mines told Human Rights Watch that because they work 12-hour shifts underground, including at night, for 15 straight days, they are often exhausted, and they have faced penalties for failure to make quotas.

Miners said that in a rush to meet quotas or without sufficient rest, workers had suffered deep cuts, were buried under rocks as roofs collapsed, lost limbs, suffered concussions, or narrowly avoided serious accidents.

During shifts, the company requires miners to live in a dormitory, in part to maximize production. GM maintains that the arrangement ensures that miners get the rest they need in living conditions that enhance safety. But this requirement unfairly interferes with their freedom of movement and their family and home lives.

“On the 9th or 10th night of work, everyone is exhausted, and a lot of workers fall asleep,” Merab, a manganese worker, said. He was injured on his 14th consecutive night underground. “Someone was sitting next to me and fell asleep and accidentally turned on a piece of equipment. I was cut, and my ribs were showing.”

Coal miners for Saknakhshiri LLC also cited working conditions that heighten risks to safety and labor rights. Miners said that a compensation system based on performance, or quantity of coal extracted, imposed production targets that could not be reached safely, encouraging workers to omit time-consuming safety measures.

Years of deregulation have left Georgian workers without adequate protection, Human Rights Watch found. In an effort to attract foreign investment, Georgia in 2006 abolished its Labor Inspectorate and dramatically reduced worker protections in the labor code. One study found that deaths at work soared by 74 percent, most of them in mining and construction. Since 2013, when a new government took power, Georgia has gradually introduced more labor protections, including establishing a labor inspectorate with a limited mandate in 2015.

In 2018, Georgia was shaken when 10 miners died in 2 accidents within months in Tkibuli, in western Georgia. Following calls from nongovernmental groups, in February 2019, parliament gave more powers to the Labor Inspectorate to address health and safety in the workplace. Even after these amendments, which go into effect in September, the Inspectorate has a limited mandate. It cannot address the broader impact of long working hours, production pressures, and difficult working conditions, for example.

Mining’s contribution to the Georgian economy and employment opportunities do not offset the serious labor rights concerns in the industry, Human Rights Watch said.

In responding to the findings, Georgian Manganese said that the “human and social rights of our employees, their health and safety have always been of utmost importance for our company.” It acknowledged that “we may have some shortcomings in our work” and said it was “ready to tackle them accordingly.” Saknakhshiri LLC said it had established a dedicated safety department in 2017 and that “labor safety has been always a priority in the company.”

Human Rights Watch is aware of ongoing efforts to address remaining gaps in the law, including with regard to overtime, days off, holidays, and minimum wages, and to strengthen the Labor Inspectorate. But no draft law has yet been introduced in parliament, and there is no clear timeline for these urgently needed reforms.

The Georgian government has made commitments in agreements with the United States and the European Union (EU) to strengthen its labor laws and oversight and enforcement systems. Georgia benefits from preferential tariffs on exports to the US, including manganese, provided that it respects and enforces internationally recognized labor rights. Manganese producers, including those employing miners Human Rights Watch interviewed, benefit directly.

Under the Association Agreement with the EU, Georgia pledged to bring its labor legislation in line with EU laws and take steps toward establishing a full Labor Inspectorate before 2020.

International human rights standards guarantee everyone the right to just and safe working conditions, reasonable limitations on work hours, fair pay, freedom of movement, and respect for and protection of family and private life. International Labour Organization (ILO) conventions, many of which Georgia has not yet ratified, detail standards with respect to acceptable working conditions, as well as proper oversight and enforcement.

Georgia’s international partners, including the EU, and the US State Department have criticized Georgia’s labor inspectorate system. In April, the United Nations Working Group on Business and Human Rights said, after a visit to Georgia, that it was concerned that the regulatory framework remains inadequate since it “will not cover the whole spectrum of labor rights.”

The Georgian government should move ahead to reform its labor law to protect workers against long hours and pressures that put them at risk. The government should put in place a full-fledged, independent, and adequately staffed Labor Inspectorate with a mandate to inspect all working conditions in line with international standards.

According to the HRW recommendations, mining companies in Georgia should respect workers’ rights and the safety of their employees, and work with employees and their representatives to carry out reforms that will improve safety. Georgia’s trading partners, including the EU and the US, should insist on full respect for labor rights.