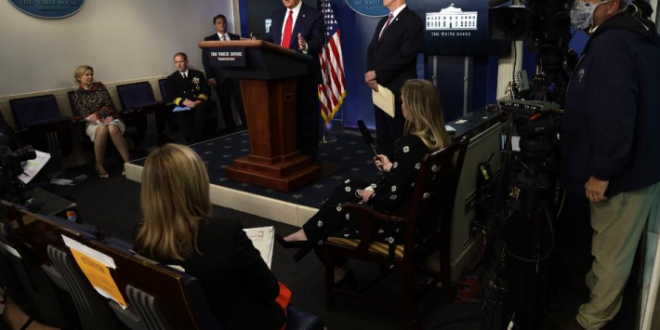 TBILISI(BPI)- With his recent vow to halt and reassess all aid to the World Health Organization (WHO), President Trump legitimized critics who allege that the agency shielded information from the world about the lethality of the coronavirus and its ability to spread by human-to-human contact.

The WHO delegation highly appreciated the actions China has implemented in response to the outbreak, its speed in identifying the virus and openness to sharing information with WHO and other countries.

The most likely presidential policy response will be to re-purpose all or most federal money from the WHO. If done in this manner, the president must notify Congress, but has the executive power to reallocate the monies to other organizations. Therefore, legitimate programs will continue to help humanity.

Responding to our request for comment, the White House, Office of Management and Budget provided a fact sheet detailing the WHO’s “corruption and abuse.”

Our auditors at OpenTheBooks.com reviewed all disclosed grants by federal agencies to the WHO since 2010 and found that $3.5 billion in taxpayer money funded the WHO during this period.

What’s more, only $611.1 million of that funding came from “assessed dues” required by participating countries. The U.S. government voluntarily sent the WHO roughly $2.9 billion more than their required contribution. It’s no surprise that, annually, the United States is the largest funder of the WHO.

The WHO received more money under Trump than Obama (inflation adjusted): $1.4 billion versus $1.1 billion.

Since 2010, the Agency for International Development (USAID) has led all federal agencies with $1.5 billion in grants to the WHO. Roughly half the USAID grant money funded three programs: humanitarian programs ($345.7 million); polio eradication efforts ($307.8 million); and efforts to eliminate tuberculosis ($116.6 million).

USAID efforts through the WHO and other international humanitarian aid agencies were singled out in a blistering USAID Inspector General report in 2018, Insufficient Oversight of Public International Organizations Puts U.S. Foreign Assistance Programs at Risk.

As of January 2018, Office of Inspector General (OIG) investigations in the region have resulted in the suspension or debarment of several dozen individuals and organizations, 20 personnel actions, and the suspension of $239 million in program funds under investigation.

The U.S. Department of State gave $820 million to the WHO since 2010. The largest portion of the money consisted of “assessments” or dues to the organization which amounted to $611.1 million. In addition, the State Department funded programs for “general assistance” ($95 million); “refugee” health ($17.3 million); “peacekeeping” ($15.9 million); and emergency vaccines ($2 million).

The coronavirus pandemic is testing the World Health Organization. Just like any other health care body, every aspect of their operation will receive scrutiny during these times of insecurity and crisis.

Our analysis of WHO funding by U.S. federal agencies shows that taxpayers have been generous and deserve to know how their money is being spent.