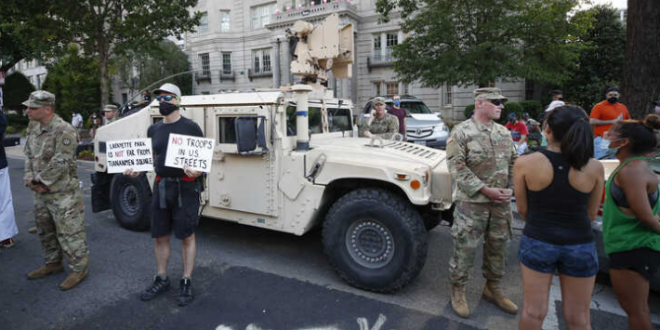 TBILISI(BPI)- U.S. President Donald Trump on Sunday ordered the 5,000 National Guard troops brought to Washington last week to quell protests against the death of a black man in police custody to begin to withdraw, saying the national capital was “under perfect control.”

“They will be going home, but can quickly return, if needed,” the U.S. leader said on Twitter. “Far fewer protesters showed up last night than anticipated!”

Even as he withdrew the National Guard troops, however, key former U.S. military leaders continued to voice their opposition to Trump’s reported threat a week ago to use as many as 10,000 active duty military troops to augment local police in Washington  against demonstrators protesting the May 25 death of George Floyd in Minneapolis, Minnesota.

The death of the 46-year-old Floyd, who was held down on a city street for nearly nine minutes by a white policeman who pressed his knee on Floyd’s neck, has spawned nearly two weeks of protests in the U.S., some of them angry, violent clashes with authorities.

But tens of thousands of Americans protested peacefully in dozens of U.S. cities on Saturday against police abuse of authority against minorities, with few reports of clashes with authorities.

In the end, 1,600 members of the U.S. Army’s 82nd Airborne Division were dispatched to Washington but not activated to calm the protests.