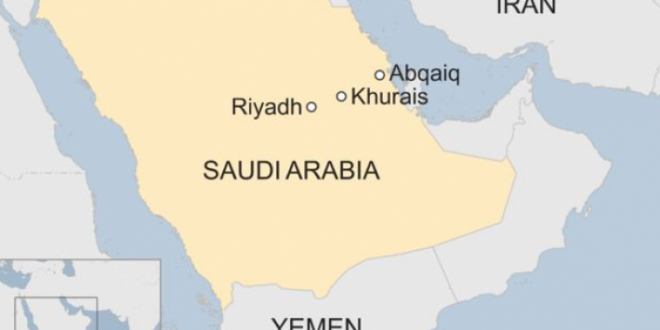 A Yemeni Houthi rebel spokesman said it had deployed 10 drones in the attacks.

US Secretary of State Mike Pompeo blamed the attacks on Iran saying there was no evidence they came from Yemen.

In a statement carried by the Saudi Press Agency (SPA), Prince Abdulaziz said the attacks “resulted in a temporary suspension of production at Abqaiq and Khurais plants”.

He said that part of the reduction would be compensated for by drawing on Aramco’s oil stocks.

The situation was under control at both facilities, Aramco CEO Amin Nasser said, adding that no casualties had been reported in the attacks.

In a tweet, Mike Pompeo described the attack as “an unprecedented attack on the world’s energy supply”.

“We call on all nations to publicly and unequivocally condemn Iran’s attacks,” Mr Pompeo added.

The US would work with its allies to ensure energy markets remain well supplied and “Iran is held accountable for its aggression”, he added.

Tensions between the US and Iran have escalated since Mr Trump abandoned a deal limiting Iran’s nuclear activities last year and reinstated sanctions.

The Houthi spokesman, Yahya Sarea, told al-Masirah TV, which is owned by the Houthi movement and is based in Beirut, that further attacks could be expected in the future.

He said Saturday’s attack was one of the biggest operations the Houthi forces had undertaken inside Saudi Arabia and was carried out in “co-operation with the honourable people inside the kingdom”.

Aramco is not only the world’s biggest oil producer, it is also one of the world’s most profitable businesses.

The Khurais oilfield produces about 1% of the world’s oil, and Abqaiq is the company’s largest facility – with the capacity to process 7% of the global supply. Even a brief or partial disruption could affect the company, and the oil supply, given their size.

The country produces 10% of the world’s crude oil. Cutting this in half could have a significant effect on the oil price come Monday when markets open.

The success of the drone strike shows the vulnerability of Aramco’s infrastructure, at a time when it is trying to show itself in its best light while gearing up to float on the stock market.