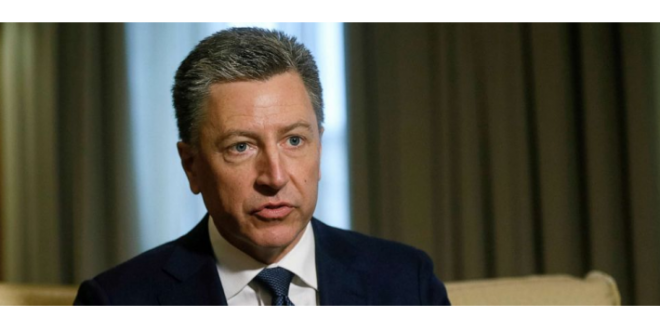 TBILISI(BPI)- Volker resigned from his role at the State Department a little over a week ago.

Kurt Volker, the president’s former special envoy to Ukraine, has stepped down from yet another post, his executive directorship of the McCain Institute, amid the fallout from House Democrats’ impeachment inquiry.

Volker resigned from his role at the State Department a little over a week ago, and his resignation as the head of the D.C.-based think tank came days after he appeared as Democrats’ first witness in their widening impeachment probe, turning over damaging text messages that appeared to undermine President Donald Trump’s claims that he did not seek to pressure Ukraine into investigating his political opponents.

In a statement released Monday announcing his departure, Volker specifically referenced the growing Ukraine scandal and the ensuing media frenzy.

“Today, I informed ASU President Crow and Mrs. McCain that I believe the recent media focus on my work as U.S. Special Representative for Ukraine Negotiations risks becoming a distraction from the accomplishments and continued growth of the Institute, and therefore I am stepping down as Executive Director of the McCain Institute for International Leadership,” he said, referring to the wife of the late Sen. John McCain, for whom the think tank was founded, and the president of Arizona State University, which is a partner of the institute.

Cindy McCain, in a statement released in tandem with Volker’s, thanked the career diplomat for his service, crediting Volker for “helping to build the McCain Institute into the results-driven, action-oriented institution that it is today. We are proud of these accomplishments and I especially appreciate his dedication to my husband and the entire McCain family.”

Volker was a key player early on in the Ukraine scandal that’s engulfed the Trump presidency. Rudy Giuliani, Trump’s personal attorney, roped him in almost from the outset, defending his snooping for dirt on the Bidens by publicizing text messages in which Volker set up a meeting between Giuliani and a top aide to Ukrainian President Volodymyr Zelensky.

And text messages released last week after his nine-hour testimony show that Volker factored in heavily as a go-between with Zelensky’s top aide. In one text, Volker suggests a meeting between Trump and Zelensky is contingent on the latter agreeing to investigate alleged Ukrainian interference in the 2016 U.S. election.

Volker was also involved in efforts for the Trump administration to weigh in on a statement being crafted for Zelensky to announce such an investigation, though he told lawmakers he desired a broader statement than Giuliani envisioned. He also told lawmakers that he gave Giuliani a heads up that he had likely been fed misinformation by contacts in Ukraine.

Volker’s revelations gave ammo to both Trump’s investigators and his defenders in Congress, who took differing stances on what his testimony meant for the narrative of the impeachment investigation.