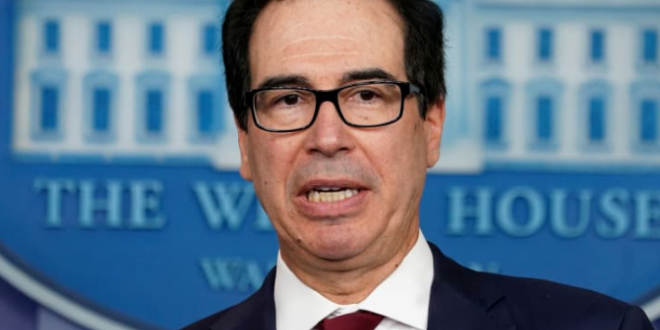 TBILISI(BPI)- Treasury Secretary Steven Mnuchin said Sunday that Boeing’s 737 Max crisis could curb U.S. economic growth in 2020 by half a point, though he expects the economy should grow by about 2.5%.

“There’s no question that the Boeing situation is going to slow down the GDP numbers,” Mnuchin said in an interview on Fox News’ “Sunday Morning Futures.” “Boeing is one of the largest exporters, and with the 737 Max, I think that could impact GDP as much as 50 basis points this year.”

Boeing this month is planning to halt production of the 737 Max, as the worldwide grounding of the planes after two fatal crashes killed 346 people. Regulators say they have no firm timeline to allow the planes to fly again, and U.S. airlines have taken the planes out of their schedules until at least April.

The crisis has already led to layoffs in Boeing’s supply chain and the grounding has sapped cash from companies that make parts for the beleaguered planes. Spirit Aerosystems, which makes fuselages for the 737 Max, announced initial layoffs of about 2,800 employees at its Wichita, Kansas plant and warned that others could be on the way.

Boeing has said it has no plans to lay off workers and last week outlined plans to reassign about 3,000 of its 737 Max workers to other parts of the company, including the 777X and 767 aircraft programs.

The fallout has cut more than $50 billion from Boeing’s market value and has cost airlines more than $1 billion.

The U.S. economy remains in the midst of the longest economic expansion on record, though some economists expect slowing growth and a potential recession over the next 12 months.

Mnuchin said he expects the U.S.-China phase-one trade deal and the U.S-Mexico-Canada Agreement to add significantly to economic growth in 2020.

The U.S. and China plan to sign a phase-one trade deal on Wednesday, which includes China purchasing $200 billion worth of U.S. goods over the next two years and the U.S. reducing tariffs on about $120 billion worth of Chinese products.