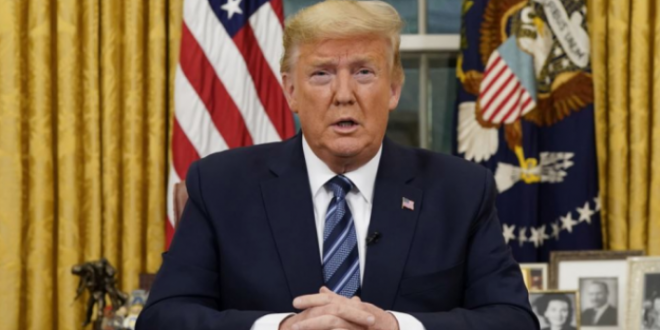 TBILISI(BPI)- President Donald Trump announced that a ban on travelers to the United States from Europe would be in place for the next 30 days, in an attempt to stem the spread of the coronavirus pandemic.

Calling coronavirus a “foreign virus,” Trump attacked Europe for not taking the same actions to control the disease that he had. “As a result” of Europe’s inaction, Trump said, “a large number of clusters” of coronavirus “were seeded by travelers from Europe.”

Trump also announced that he would ask Congress for legislative action to provide payroll tax relief, as well as other measures for several groups impacted by the virus.

In addition to legislation, Trump said he would instruct the Small Business Administration to “provide capital and liquidity” to small businesses.

Trump said the ban would apply only to countries in the Schengen economic and travel zone, and that the United Kingdom and Ireland would be exempted. He also later clarified in a tweet that cargo and goods would not be affected by the ban.

The European Commission did not immediately have a comment on Trump’s announcement.

U.S. stock futures fell sharply as Trump concluded his speech with Dow Jones Industrial Average futures trading more than 600 points lower. Those losses would add to the 30-stock average’s steep decline on Wednesday that put it more than 20% below its record high from just last month.

New developments about the disease quickly overtook the president’s message. Moments after Trump concluded his address, superstar actor Tom Hanks announced he and his wife, Rita Wilson, had tested positive for coronavirus. The NBA on Wednesday night announced it would suspend its season until further notice after a Utah Jazz player tested positive for the virus.

Wednesday’s market losses were driven in part by a new declaration by the World Health Organization that coronavirus had reached pandemic levels.

Yet as the virus increasingly spreads through the United States by community transmission, it is not at all clear that travel restrictions can significantly impact the spread.

More than 1,200 cases have been diagnosed in the United States, while there are at least 118,000 cases worldwide.