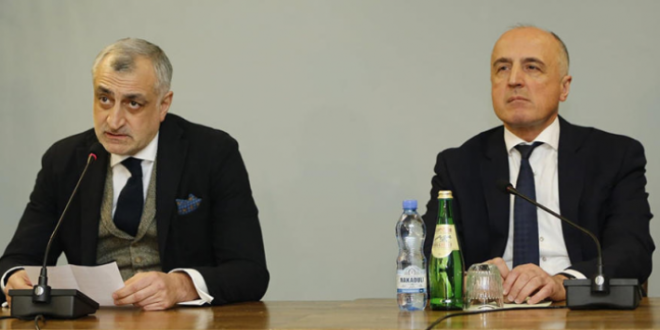 TBILISI(BPI)- Mamuka Khazaradze and Badri Japaridze are leaving the positions of the chairman and the deputy chairman of the Board of Directors of TBC Bank until the investigation is completed. Mamuka Khazaradze wrote in the social network about it.

“As you know, today the briefing of the Prosecutor’s Office has made a serious impact on the price of the TBC Bank’s shares during the last 6 months. As in January-December, its price has fallen by 12 % during the day. As the result of it, the shareholders of the bank have suffered 130 million dollars today. The previous two briefings had the same results.

This is a deliberate action against international investors and financial stability of our country.

I would like to remind you that on June 24, our shareholders in London reelected Badri [Japaridze] and I as the chairman and the deputy chairman of the bank with 98% of votes and we thank each of them for such trust. However, due to the endless unfair attacks on us, the bank, its shareholders and employees suffer from it. So we leave our position in the bank until this absurd process is over. We believe that the institution we have been building for 27 years, which has become a symbol of success for our country, will continue to implement its strategic goals. Truth will surely out !!! ” Mamuka Khazaradze writes.