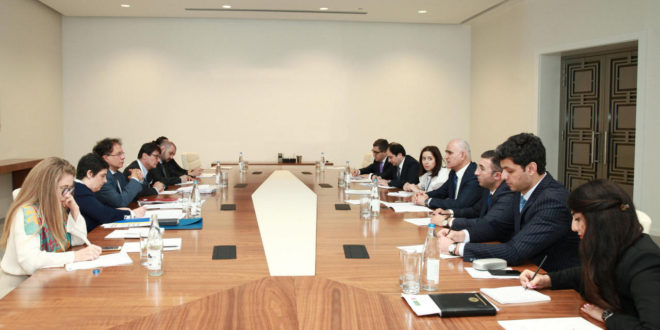 TBILISI(BPI)- In general, Italian companies has invested in Azerbaijan about $530 million, and the volume of Azerbaijani investments in Italy is estimated at $135 million.

Azerbaijani Economy Minister Shahin Mustafayev made the remarks during a meeting with Deputy Minister of Economic Development of Italy Michele Geraci in Baku on July 19.

Mustafayev noted that the two countries have great potential for expanding economic relations, including such areas as energy, agriculture, industry, trade, investment, transport, and ecology.

“Azerbaijan is interested in realizing the existing potential and developing economic relations between the countries. Italian technologies are used at a number of enterprises operating in Azerbaijan. We can also import technologies for such areas as agriculture and industry. In addition, Italian companies can take part in investment projects in Azerbaijan, invest in industrial parks and neighborhoods, agricultural parks and logistics centers and take advantage of the opportunities of such projects as the Baku-Tbilisi-Kars (BTK) railway and the Baku International Sea Trade Port, as well as free economic zone, which will be established in the village of Alat,” the Azerbaijani minister said.

In turn, Geraci stressed that Azerbaijan is an important partner for Italy, noting the successful cooperation between the countries in various spheres of the economy.

Italy recognized the independence of Azerbaijan in January 1992 and the diplomatic relations between the two countries were established in May in the same year.

The two countries have a close cooperation on different realms and Italy is one of the most important partners of Azerbaijan in the EU, Azernews reports.

In January-May this year, Azerbaijan exported most of its products to Italy, in the amount of $1.651 billion.